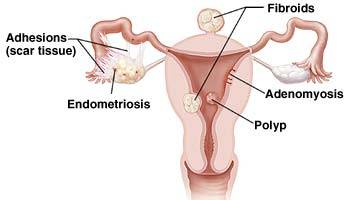 Endometrial or uterine polyps form when the tissue lining the uterus experiences an overgrowth. The overgrowth causes endometrial polyps to develop. Although typically benign, these polyps can in some cases become cancerous.

In some cases, endometrial polyps that are small and cause no symptoms may not be treated at all. Doctors may just monitor the size of the polyps over time. Other cases may be treated with hormonal medications that may shrink the polyps and lessen symptoms. Polyps that continue to grow and cause symptoms are often removed through surgery.

If a doctor recommends the removal of endometrial polyps, the removal will most likely be performed through a surgical procedure called a hysteroscopy.

A local or general anesthesia may be used to relax the patient and relieve any potential discomfort. After the area is cleaned and numbed with an anesthetic, the cervix is gently dilated and then expanded with gas or fluid. The hysteroscope, which has a light and camera, is inserted into the vagina and moved through the cervix to the uterus. The hysteroscope projects an image onto a display screen for the doctor to review. Using a surgical device, the doctor will then cut and remove the polyps. Patients may experience some cramping or vaginal discharge following the procedure.

After removal, uterine or endometrial polyps rarely reoccur, however patients should continue follow-up with their doctor.